In case you aren’t sure what Disney Dole Whip is, let me explain. It’s a creamy pineapple soft serve that you can get at Disney parks that are actually vegan and gluten-free as is! I love it, but I haven’t been to go to the Mouse House in a while, so I’m making a tastier (and healthier!) pineapple whip at home in my Ninja Creami.

It’s a simple recipe, easy to make, cools you down on a hot summer day, and only requires 2 ingredients. It’s dairy-free, has no added sugar, and doesn’t require you to mix it with already made ice cream like many other recipes do.

Plus when you make it at home you skip the long lines at Magic Kingdom. It’s also vegan, paleo, gluten-free, no added sugar, salt-free, and nut-free. It always reminds me of the enchanted tiki room, which is my favorite cheezy attraction, and where Disney’s collaboration with Dole Foods began.

The main tool required for this recipe is a Ninja Creami, but you could freeze the mixture in ice cube trays and blend in a high-power blender or food processor. I think this recipe tastes better than the real thing, even if you ate it inside the Polynesian Resort at the world’s happiest place.

What are Dole Whips?

It’s a creamy soft serve of different flavors that’s almost always vegan. From my experience with the traditional pineapple Dole whip at Walt Disney World, I thought it was always made with fresh pineapple chunks, but Disney’s dole whip recipe is actually made with a dry mix.

The most popular flavor is pineapple, so that’s the one I wanted to copycat first. This recipe uses real pineapple and its juice plus a little nondairy milk, and that’s it.

I think my recipe tastes better and you can pronounce more of the ingredients in the recipe for sure!

I had Dole Whip for the first time at Disney World in Orlando Florida. It started out with pineapple flavor only but has expanded to strawberry, lemon, lime, and even more flavors.

Note: Sometimes it’s swirled with a vanilla ice cream soft serve that may not be vegan, so make sure to double-check!

Most fruit flavors of Dole Whip are vegan, but I always look at the ingredient cards out in case there was a formula change. There are almost always vegan options where ever they sell Dole soft serve.

Pineapple, Mango, Lemon, Orange, Raspberry, Strawberry, Lime, Cherry, and Watermelon are all stated to be dairy and gluten-free at the writing of this post.

This copycat pineapple whip is 100% plant-based and vegan.

What is Dole Whip Made Of?

My plant-based copycat pineapple Dole Whip is made of simple ingredients, just fresh or canned pineapple, its juice, and maybe a few tablespoons of your favorite unsweetened non-dairy milk. That’s it!

It can be a can of crushed pineapple or a fresh pineapple you cut up and blend in your blender.

The Dole Whip soft serve mix you can buy at Disney or on Amazon’s main ingredients are:

Ack! That’s a big difference. I’ll take a bowl of my recipe, please!

How do you make pineapple dole whip in your Ninja Creami Ice Cream Maker?

All you need is some crushed or diced pineapple, canned, fresh, or frozen. Sometimes I add non-dairy milk, and rarely, if your pineapple is not sweet or ripe, you may need to add a little sweetener.

I like to blend everything together if the pineapple is not already crushed to make it smoother. But you can dump canned crushed fruits and the juice into a Creami pint container.

Don’t overfill past the max line, put on a lid, and place it in the freezer where it will sit flat. Freeze for 24 hours.

Take out the pint, remove the lid, and spin in your creami. You can watch the video attached to this post to see the steps broken down with lots of tips. Or you can read the how to use your Ninja Creami ice cream maker article here.

Can I make pineapple whip in a Yonana?

You sure can and all you need is some frozen pineapple bits that you let sit out at room temperature for about 10 minutes.

Fill the tube in your Yonana and press hard to get it processed through the machine. You can stir up the frozen treat or even thin it a little by mixing in some non-dairy milk, creamer, or coconut milk.

How do I make pineapple dole whip in my food processor or blender?

Add the pineapple to your food processor and process until it starts to look crumbly, then add non-dairy milk as needed to make a thick sorbet.

If you are using a high-blender then you’ll need to add some non-dairy milk as you go to be able to blend, and you will need to use a tamper if you have one.

But how can just pineapple look that creamy and be a dairy-free dessert? I think it’s a combo of the fiber in the pineapple plus the “creamizer blade” shaving it does the trick, and it actually looks like sherbet or ice cream more than a sorbet.

Maybe it’s all the fiber from the pineapple, after all, that’s what it’s mostly made of.

If it comes out looking crumbly or powdery, just add in a few tablespoons of non-dairy milk and spin again on the sorbet setting.

Note: If your freezer is extra cold you may have to spin it up to 3 times. Next time take the pint out 5 – 10 minutes before spinning and that will help it spin better.

What Do I Need?

How to Make Pineapple Whip

While you do not need to blend first if using a Ninja Cremi, I find that it creates a creamier product in the end.

I also prefer to get crushed pineapple if I buy canned, but if you puree in the blender first you can even use frozen pineapple.

Once blended, freeze for 24 hours in a Creami pint, then spin it

What are some creative ways to enjoy vegan dole whip?

I can sweeten it just with fruit, use maple syrup, dates, or anything else that fits into my eating plan!

It’s also a great way to get more fruit into your family. You can even add in mint or greens in to your blender with it too!

What ingredients do you need to make vegan dole whip?

Unsweetened pineapple, some pineapple juice from the can or cutting the pineapple, and possibly a little non-dairy milk.

You can add an additional sweetener, vanilla, or even some full-fat coconut milk if you want to make it more decadent.

What are some of the best toppings for vegan dole whip?

At Disney, you can get pineapple whip topped with strawberry syrup, watermelon syrup, pineapple juice or a tropical juice blend.

I think coconut rum and a splash of passion fruit syrup would be a dream come true for an adult beverage.

Try mixing any of the whip flavors with vegan vanilla or coconut ice cream for an extra special treat.

How do you store vegan dole whip?

In the freezer, silly! If you have leftovers you could put it in popsicle molds so kids can grab one without bothering you to respin it.

If you have leftovers though, you can just smooth down the top in your Ninja Creami pint, put the lid on, and then freeze to respin using the sorbet button when you’d like to have it again.

What are some tips for making the perfect vegan dole whip every time?

No matter what method you are using to make it, let it sit at room temperature for about 5 minutes before processing.

Some people put the lidded pint under warm water for less than a minute to get the thin layer of ice at the edges to melt. Since the creamizer blade doesn’t go all the way to the pint, that eliminates that before you even begin to spin it.

If the mixture looks like a powder, don’t panic. It’s totally fixable. It usually means that your freezer is extra cold. You could change your freezer temp, but I just take my pint out 5 to 10 minutes before I spin it. You can also just run the pint under warm water for a minute or put it in the microwave for about 30 seconds.

What are some common mistakes people make when making vegan dole whip?

If you are using fresh pineapple, you may have to add a little sweetener if your pineapple isn’t ripe enough or just isn’t that sweet. Just add some date paste, maple syrup, agave nectar, or even a simple syrup that you make yourself.

You may not think about this, but if you have been using canned pineapple in juice it is cooked some during the canning process. Why would that matter?

Back to fresh pineapple again, it will be much more acidic because the bromelain is tamed some in cooking.

To prevent pineapple burns, remove the core and grill or cook a bit. Or if you are like me and lazy, just don’t eat more than 1 cup of homemade Dole whip made with fresh pineapple just to be on the safe side.

Are you already burning? Don’t fret. As long as you don’t have an allergy, it will go away in an hour or two. 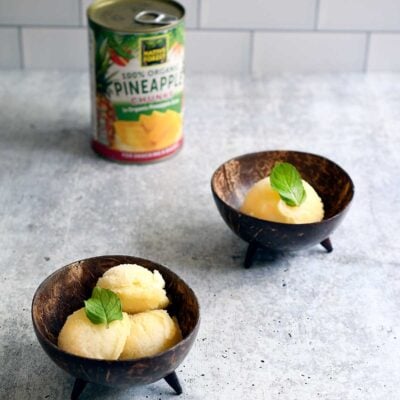 Feel free to add some vanilla extract or a teaspoon of real rum for flavoring. If your can of pineapple in juice doesn’t fill up the pint, add non-dairy milk to reach the max fill line.