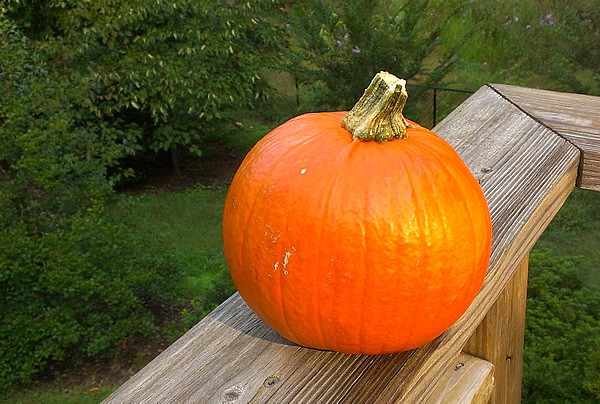 The pie pumpkin before cooking but after being thoroughly washed.

Last week the pie pumpkins were peeking out at me begging to join in on some cooking fun. I’ve talked about making pumpkin puree before, but today I’m providing some step-by-step instructions and pictures. Let’s hear it for trying to overachieve for Mofo!

It’s really easy to make, but you’ve heard that before. Plus if you’re like me, you want to see some proof *smile*.

Here are some pumpkin recipes for you to try:

Why pie pumpkin? Sometimes they are also called sugar babies or other new small sweet variety that’s hip that year. They are smaller than the decorating pumpkins, but have thicker walls of flesh making more puree for your time and effort.

After you’ve washed the pie pumpkin to remove any dirt (or pesticides if it’s not organic), poke holes in it with a fork .

Then place the pumpkin in your slow cooker and cook on low 7 to 9 hours. It may be done earlier, but it won’t hurt it to stay in the slow cooker longer.

I have it pictured below in my Hamilton Beach 3-in-1 – which I use a lot for making tomato and pumpkin puree. I can choose either the 4 or 6 quart insert – depending on how tall the pumpkin is. I can even cook a jack-o-lantern pumpkin in the 6 quart one!

It’s true – you don’t have to spray your slow cooker with oil or wrap the pumpkin in foil. You can spray some oil if you’re really worried about clean up. But I find it’s just as hard to clean off the oil as it is any juices that cook out of the pumpkin.

Either way you decide to do it, after your done, soak the crock filled with a soapy water overnight and it will look like new. I’ve done some serious burned-on food in my experiments, and worse-case Cheryl used bar keeper’s friend to clean it up. (She’s the genius in the cleaning department.) 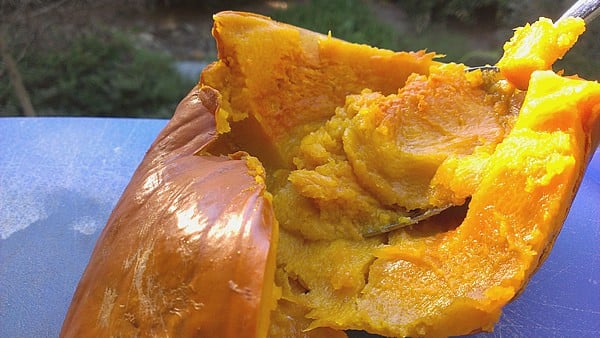 Make sure to let the pumpkin cool before you cut into it. If not, you will get scalded from the steam that comes out. If you cook it while you are at work, just let it cool until after dinner.

Cut it in half and gently scoop out the seeds and guts. Some of the flesh will stick to the guts, so make sure to snag it where necessary.

Save the seeds because you can toast them even though they have been cooked and you’ll have a perfect snack or soup garnish. 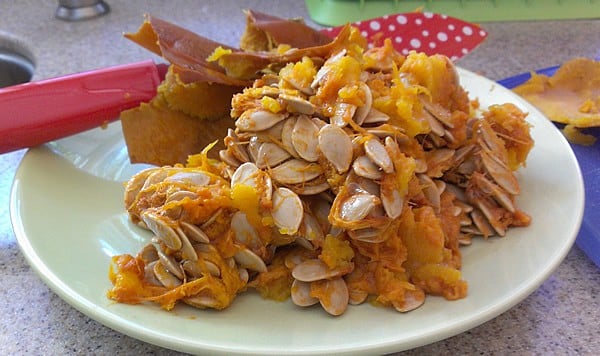 After all that effort you’ll have a bowl of pumpkin flesh that only needs to be smashed with a spoon to puree completely. 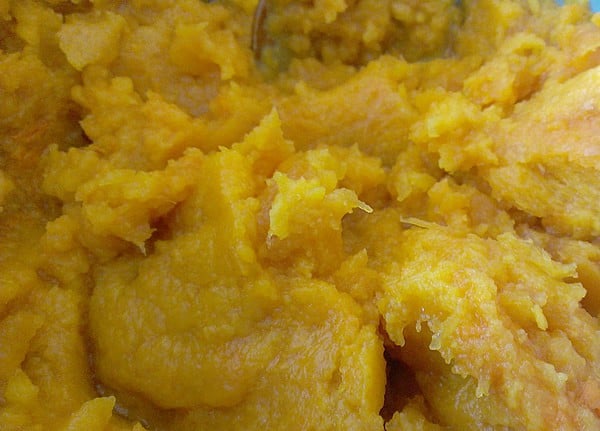