Jump to Recipe
Table of Contents show
1 Why make this golden gravy mix?
2 Is all gravy vegan?
3 Can I make this gluten-free?
4 Can I make this salt-free?
5 What is in the vegan gravy mix?
6 Delicious options
7 Can you buy vegan gravy?
8 How to make vegan gravy mix
9 How to make vegan chicken gravy from this mix
10 Can I use this to make something besides gravy?
11 How do I store it?
12 What is gravy good on?
13 Can you reheat vegan gravy?
14 Looking for more vegan Thanksgiving recipes?
15 Easy Homemade Vegan Gravy Recipe: Golden Mix for Plant-Based Chicken Gravy
15.1 Equipment
15.2 Ingredients 1x2x3x
15.3 Instructions
15.4 Notes
15.5 Nutrition
Share on PinterestShare on FacebookShare on TwitterShare on RedditShare on EmailShare on WhatsAppShare on LinkedIn

Making the best vegan gravy recipe is so easy. Just make a batch of the golden gravy mix, then toast it in a saute pan and whisk in water or nondairy milk.

This gravy is perfect on vegan mashed potatoes, air fryer soy curls, and of course, for a perfect vegan Thanksgiving dinner!

Why make this golden gravy mix?

This easy vegan gravy is from my book, OATragrous Oatmeals, and my friend Mia’s favorite recipe of mine. It’s absolutely delicious. And everyone needs a vegetarian gravy recipe in their back pocket.

This simple recipe makes a traditional gravy that you find at a Thanksgiving feast.

Making your own gravy mix saves you money. Just use some of the mix to create a vegan turkey gravy whenever you want it.

Store-bought mixes can have a lot of sugar, salt, or other ingredients you may be avoiding. Making your own means you know everything that goes into it.

It’s convenient to have a mix ready to go. And honestly, we use it at my house for lazy meals. It’s cheaper than getting takeout and you end up eating better at home anyhow!

It’s oil-free, so that means no vegan butter or olive oil is needed.

Got allergies? This mix is soy-free, sugar-free, nut-free, you can easily make it gluten-free by using gf oats, and you can use your choice of salt or a salt substitute.

Is all gravy vegan?

Much gravy out is not vegan because it usually contains animal-derived ingredients. This is especially true if you are eating out at a non-vegan restaurant.

It can contain animal fat, butter, and other non-vegan ingredients. But there are vegan alternatives.

There are tons of vegan gravy recipes and this one makes a vegan chicken gravy, or you can try my vegan white gravy mix recipe to make a country gravy.

To get this chicken flavor we use nutritional yeast, herbs, and spices. No animal products are needed to make a delicious gravy!

Can I make this gluten-free?

Just make sure to get gluten-free oats and you are good to go. Can’t have oats? Use fine ground mild-flavored flour like brown rice flour.

Can I make this salt-free?

Absolutely! You can just leave it out, or you can use your favorite salt substitute.

What is in the vegan gravy mix?

This easy vegan gravy recipe uses simple ingredients that you have in your pantry right now.

Gluten-free rolled oats are pulsed into oat flour in my recipe, but you can use other flours. Just remember that fine flour makes smooth gravy, and the more neutral the taste the better it will work.

The nutritional yeast gives it some of the golden color and all of its vegan chicken umami flavor. A little turmeric adds the rest of the yellow color but doesn’t really overpower any of the other flavors.

Garlic and onion powder add that extra flavor punch, and I love the slightly floral addition of coriander.

You can use granulated garlic instead of garlic powder if that’s what you have. In fact, if if you have dried minced garlic or onion it will work as long as you blend the mixture into a powder.

I use an herb mixture of thyme, marjoram or oregano, but you could add in some additional herbs like rosemary or basil,

Finally, a little black pepper, and salt if you use it. You can totally leave the salt out if you eat salt-free.

If you aren’t a fan of any of the herbs or spices in the ingredients experiment with switching them out with something you do like.

The best way to do this is to make the mix minus the ones you don’t like and mix it up. Then smell the bottle of the herb you are thinking of using at the same time as the base mix.

Your nose will tell you if it’s a yum or a yuck. Listen to your nose, it knows more than you think. Poultry seasoning is a great addition too.

Add a little vegan Worcestershire sauce, soy sauce, dried mushrooms, or tomato paste to make your gravy taste a little darker and have more depth of flavor. It won’t taste like a chicken base anymore but it will be an amazing vegan gravy.

Can you buy vegan gravy?

There are vegan gravy mixes that you can buy, but with the cost of mixes going up it’s much less expensive to make your own.

Check at your local Whole Foods, Sprouts, or Co-op for vegan gravy packets. There are some accidentally vegan gravies too, but there are other ingredients in them that you might want to avoid.

How to make vegan gravy mix

It’s ridiculously simple to make this mix! You can vary the spices to make it your own or even to customize for a particular dish.

I recommend doubling or tripling the ingredients and making a larger batch to have on hand.

Just blend all ingredients into a smooth powder.

Feel free to leave out the salt or use a salt substitute if you are on a salt-restricted diet. Store in an airtight container.

How to make vegan chicken gravy from this mix

Lightly toast ½ cup of the gravy mix in a large saute pan on medium heat.

Then add about 1 ½ cups of water, soy milk, or vegetable stock and turn the heat to medium-high whisking the whole time.

You can add in some fresh herbs, use vegetable broth instead of water, to give it a rich flavor.

Once it almost comes to a boil, turn to medium, and whisk until the sauce is as thick as you’d like. Add extra liquid if it gets too thick, or turn the heat up if it’s taking too long to thicken.

Can I use this to make something besides gravy?

Why, yes you can. It’s a great use to thicken other sauces and even soups or stews.

How do I store it?

It’s important to keep the mix dry. So store it in an air-tight jar or container. You can even add a descant package from your vitamins if you live in a humid place like I do.

If you have any leftover gravy, you should store that in the fridge. I wouldn’t recommend freezing it and it’s so quick to make from the mix it doesn’t really buy you any extra time.

What is gravy good on?

Gravy is good on so many things that it’s hard to narrow it down. Mashed potatoes are a no-brainer, but southerners eat it on steamed rice too.

But try it with your favorite crispy air-fried protein over a freshly made waffle for a savory decadent treat.

And try it on french fries for a New Orleans Style Po’boy or some poutine.

Can you reheat vegan gravy?

Vegan gravy can be reheated either on the stovetop or in the microwave. One thing to know is that gravy thickens more as it cools.

That means you will need to whisk in extra liquid, like vegetable stock, until it’s thinned back out to the consistency you want it to be. 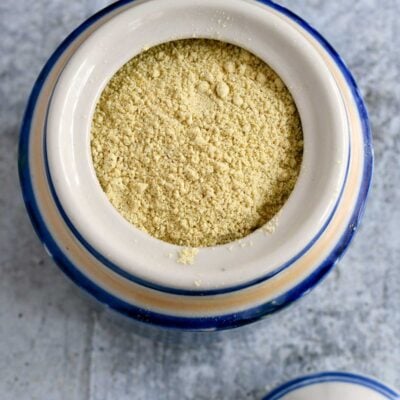 Kathy Hester
In the past, I always had a few packets of vegan gravy mix tucked away in the pantry. Cheryl, my grown-up picky eater, loves her mashed potatoes and gravy, so I want to be able to make some quickly. This can double as a soup bouillon powder and works well when you want to thicken a soup.
5 from 1 vote
Print Recipe Pin Recipe
Prep Time 10 mins
Cook Time 0 mins
Course Side Dish, staple
Cuisine American
Servings 3 batches of gravy
Calories 141 kcal

To make gravy: Lightly toast ½ cup mix in a large saute pan on medium heat. Then add about 1 ½ cups of water and turn the heat to high whisking the whole time. Once it almost comes to a boil, turn to medium, and whisk until the sauce is as thick as you’d like. Serve over mashed potatoes, vegan chick’n patties or wherever you think a little gravy would brighten things up.