Jump to Recipe
Table of Contents show
1 More vegan Halloween recipes
2 What is gumbo?
3 What is the holy trinity?
4 WHY USE YOUNG GREEN JACKFRUIT?
5 IS CAJUN SEASONING THE SAME AS CREOLE SEASONING?
6 What’s the difference between a Creole gumbo and a Cajun one?
7 Recipe ingredients plus substitution ideas
8 How to make slow cooker vegan gumbo recipe
9 How to store
10 Louisiana vegan gumbo tips
11 Why have forbidden rice with this jackfruit gumbo?
12 More New Orleans vegan dinner recipes
13 Swamp Monster Slow Cooker Jackfruit Gumbo
13.1 Ingredients 1x2x3x
13.1.1 For the main gumbo:
13.1.2 For finishing:
13.1.3 For serving:
13.2 Instructions
13.3 Video
13.4 Notes
13.5 Nutrition
Share on PinterestShare on FacebookShare on TwitterShare on RedditShare on EmailShare on WhatsAppShare on LinkedIn

My Slow Cooker Vegan Gumbo with Jackfruit and Sausage is easy to make and gets dressed up for a spooky Halloween dinner at home. It’s a plant-based and gluten-free version of a chicken sausage gumbo and we serve it with black forbidden rice, but brown or white rice works too!

A bowl of gumbo can turn your day around. Vegan Southern cooking is comforting, delicious, and you can enjoyit anytime. There are lots of vegan versions of a classic gumbo recipe and I really love this Creole version. But if you are looking for an Instant Pot gumbo, check out my mushroom gumbo.

There is also a traditional vegetarian recipe called gumbo z’herbes that fits into a vegan diet. This recipe is vegan, gluten-free, soy-free, and has no added oil so it’s perfect for all the guests you’re having over for Halloween or any other time.

This is just one of the 25 spooky recipes you’ll find in my Halloween e-cookbook, The Ghoulish Gourmet Halloween e-Cookbook. You can get the Kindle version at Amazon and if you have Kindle Unlimited you can read it for FREE!

One of my testers for the book, Robin Fetter of The Real Vegan Housewife, says the soup had “an awesome foamy green effect on top” when she served it immediately, but that the green became less bright after twenty minutes. She highly recommends puréeing the greens into the soup.

It is a traditional Cajun or Creole stew with many different variations and versions. The main ingredient in gumbo is usually some type of protein, but in this recipe, we use jackfruit and vegan sausage.

While this is not a traditional gumbo recipe, this meatless gumbo is filled with flavors of green bell pepper, bay leaf, Cajun spices, fresh okra, that give it a rich flavor.

There is a traditional vegetarian recipe called gumbo z’herbes that fits into a vegan diet.

What is the holy trinity?

In Louisiana, this is a mixture of chopped green bell peppers, celery, and onion or shallot. It’s used to build flavors in stews like this gumbo.

In New Orleans, you can buy it already cut up in the veggie section of the grocery. Sometimes I can even find it frozen in North Carolina, so you might see it where you are too.

WHY USE YOUNG GREEN JACKFRUIT?

Young green jackfruit is a champion in many vegan dishes, such as this jackfruit gumbo, since it can mimic chicken or crab meat texture.

Note that young, unripe, or green jackfruit has a completely different consistency from the ripe, yellow jackfruit. You need to cook it before you can eat it. In contrast, you may eat ripe jackfruit the way would any other fresh fruit.

IS CAJUN SEASONING THE SAME AS CREOLE SEASONING?

Cajun and Creole seasonings are actually quite similar and are frequently used interchangeably by many. Cajun relies more on peppers, while Creole is milder and uses more European herbs such as basil, oregano, bay leaf, rosemary, parsley, and thyme.

I use Cajun seasoning for this jackfruit gumbo, but you may also use Creole as a 1:1 sub and just add some pepper powders to spice it up a little more.

What is Cajun seasoning made of?

Cajun is a rustic seasoning blend that traces its origins back to Louisiana, famous for its delectable Cajun cuisine. Cajun seasoning appears to have many variants, but it’s generally a spicy combination of paprika, cayenne, black and white pepper, garlic powder, and oregano.

What’s the difference between a Creole gumbo and a Cajun one?

In Creole cooking, a gumbo typically does not have a roux but instead uses tomatoes and okra to thicken it up, but it’s a bit thinner. A Cajun gumbo is generally thicker because it has a roux and okra in addition to meatier ingredients.

In the morning: Add all the main gumbo ingredients to your 4-quart slow cooker. Cook on low for 7 to 9 hours.

Minutes before serving: Add the greens to a blender with a little water and purée until smooth. Then add salt, pepper, and more Cajun seasoning if needed.

Remove bay leaves and serve gumbo topped with the green “swamp” purée and a scoop of black forbidden rice. Or just serve with brown rice when you want a less spooky variation.

Let cool completely, then store in the fridge for up to 5 days. You can also freeze in an airtight container for up to 2 months.

Why have forbidden rice with this jackfruit gumbo?

I just wanted to keep the Halloween theme, and forbidden black rice is just perfect for a spooky gumbo. As always, you can choose any type of rice, but you can get creative and stick to the vegan Halloween theme, too.

I have a joke running inside my head right now saying “oh it’s forbidden for centuries so I haven’t really tasted it!” But kidding aside, forbidden black rice has a nutty, earthy flavor from its bran (outer husk) and a very delicate, somewhat sweet interior. No wonder it was just reserved for the Chinese emperor long ago!

If you store it in the right place, uncooked forbidden rice can last for as long as 6 months to 2 years. So make sure to reseal the package once you’ve opened it, or better yet, refrigerate.

When cooked, unpolished rice varieties go bad more quickly than polished white rice, so I’d usually cook just what I need for the meal or freeze the leftover if any. 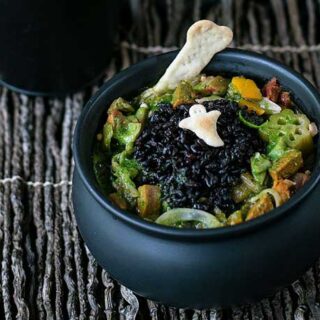 Kathy Hester
This chunky stew is full of okra, tomatoes, vegan sausage and stringy jackfruit. One of my testers, Robin Fetter of The Real Vegan Housewife, says the soup had “an awesome foamy green effect on top” when she served it immediately, but that the green became less bright after twenty minutes. She highly recommends puréeing the greens into the soup.
5 from 2 votes
Print Recipe Pin Recipe
Prep Time 15 mins
Cook Time 8 hrs
Course Main Course
Cuisine Creole
Servings 4 to 6 servings
Calories 273 kcal

For the main gumbo:

* shred the jackfruit with your hands – it will happen easily as you remove the large seeds.