Jump to Recipe
Table of Contents show
1 Are You Feeling the Summer Yet?
2 Do You Use Your Slow Cooker in the Summer?
3 A Few of My Favorite Summer Slow Cooker Recipes
4 Slow Cooking for Two
5 Can I Freeze This Eggplant Tapenade Recipe?
6 Do I Have to Use Black Olives?
7 More Slow Cooker Recipes
8 Eggplant Tapenade from Vegan Slow Cooking for Two
8.1 Equipment
8.2 Ingredients 1x2x3x
8.3 Instructions
8.4 Notes
8.5 Nutrition
Share on PinterestShare on FacebookShare on TwitterShare on RedditShare on EmailShare on WhatsAppShare on LinkedIn

My Slow Cooker Eggplant Tapenade will prove that your crockpot is eggplant’s best friend.

This warm slow cooker eggplant tapenade is perfect for summer dinner and it doesn’t heat up your kitchen. Eat it cold on crackers or in lettuce wraps.

Are You Feeling the Summer Yet?

The hot and humid North Carolina summer weather wears me out after a simple walk around my tiny garden or after a few hours working on the deck.

The heat makes me feel less motivated and more time thinking about napping than cooking.

That’s when it’s time to put my slow cooker back on the counter. I can throw everything in before it gets too hot and dinner will be ready when I’m hungry!

Do You Use Your Slow Cooker in the Summer?

This is the time of the year that slow cookers are made for. Make dinner while doing other, less heat-producing, chores.

While I’m writing this, I have 2 cooking away in the kitchen and it doesn’t heat the house up one bit. I’ll be posting more summer slow cooker recipes as the season wears on, so don’t put that slow cooker away!

I’ve been watching and waiting for my tomatoes to get ruby red and my eggplant to grow large enough to pick.

It will be a while before mine are ready, so I got some early tomatoes from the farmers market, and gave I in and bought an early eggplant at Trader Joe’s.

Don’t judge me – I really wanted to make the Eggplant Tapenade from my book  Vegan Slow Cooking for Two.

It’s great straight from the slow cooker, but perfect for summer when you eat it cold from the fridge on crackers.

A Few of My Favorite Summer Slow Cooker Recipes

Slow Cooker Pizza Rolls are a fun side for a large dinner salad. You get the best of both worlds and still keep the house cool.

Don’t forget dessert! You can make my vegan slow cooker pound cake. Enjoy it with a scoop of vegan ice cream.

If you are a small household of one or two you need these fun and easy recipes!

Can I Freeze This Eggplant Tapenade Recipe?

This freezes great and is an easy way to preserve your summer harvest.

I like to thaw some out in the dead of winter to remind me that summer will eventually be back again.

Do I Have to Use Black Olives?

I love this veggie combo, but if you aren’t in love with olives, just leave them out. After all, this is your dinner, not mine!

My slow cooker recipes for two use a small 2-quart or 3-quart slow cookers. It’s the perfect size for 2 portions and you can usually pick one up on sale at a big box store.

Keep your eyes open at the thrift store too, because I see dozens cycle through over the course of a year. 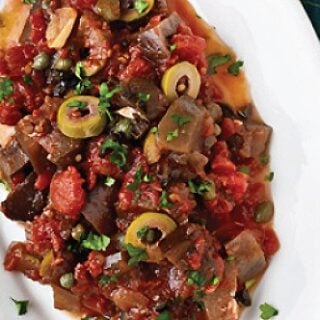 Kathy Hester
The slow cooker is eggplant’s best friend. This warm veggie spread will prove it to you, plus that can be crunchy or smooth – it’s all up to you.
4.32 from 22 votes
Print Recipe Pin Recipe
Prep Time 15 mins
Cook Time 8 hrs
Total Time 15 mins
Course Appetizer
Cuisine American
Servings 8 servings
Calories 19 kcal

You can either leave it chunky for bruschetta or purée it in a food processor until you have tiny pieces for crackers or crostini. 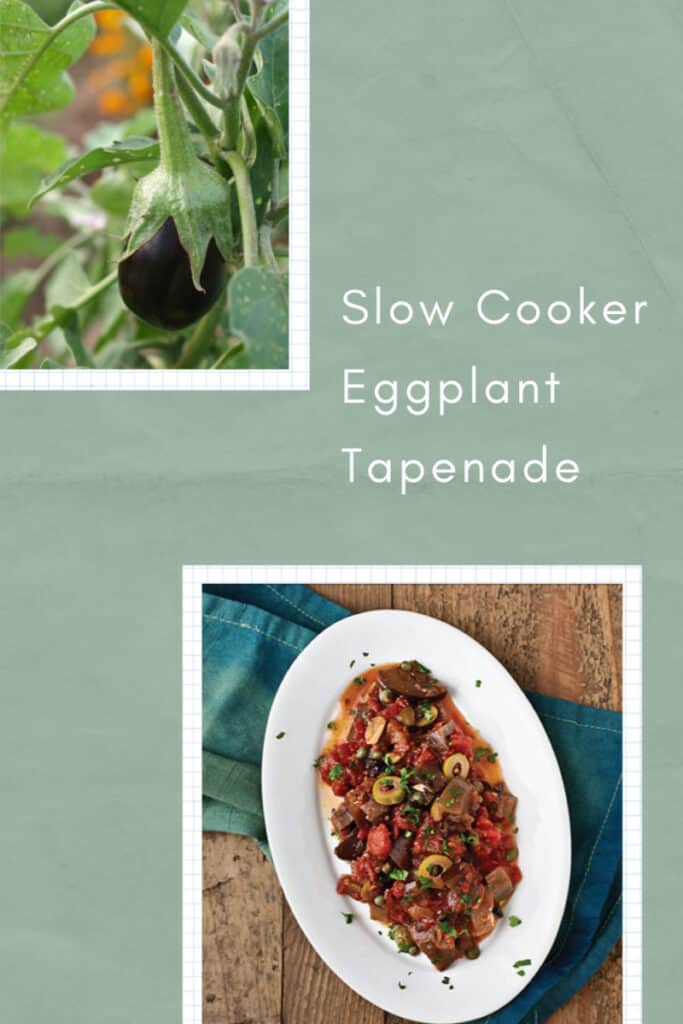