Table of Contents show
1 Chickpea Noodle Soup with Spiralized Celeriac Will Hit the Spot!
2 What is celeriac?
3 Is Celery Root Hard to Peel?
4 Is Celeriac Expensive?
5 How Do You Spiralize Celery Root?
6 Chickpea Celeriac Spiralized "Noodle" Soup
6.1 Ingredients
6.2 Instructions
6.2.1 Nutrition Information
6.3 Did you make this recipe?
7 More Recipes to Try
Share on PinterestShare on FacebookShare on TwitterShare on RedditShare on EmailShare on WhatsAppShare on LinkedIn
Jump to Recipe 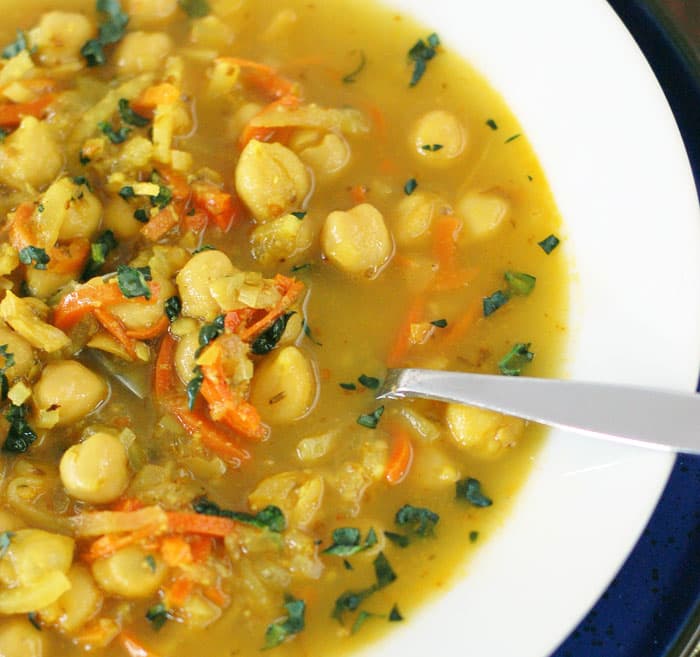 Chickpea Noodle Soup with Spiralized Celeriac Will Hit the Spot!

My Chickpea Noodle Soup actually has no real noodles in it at all. Instead, it’s overflowing with noodle-thin strands of celery root and carrot. I think that alone makes this an over-achieving veggie soup.

If you have a spiralizer, this recipe is a great excuse to get it out. If you can’t find affordable celeriac, you could do carrot or zucchini noodles instead. 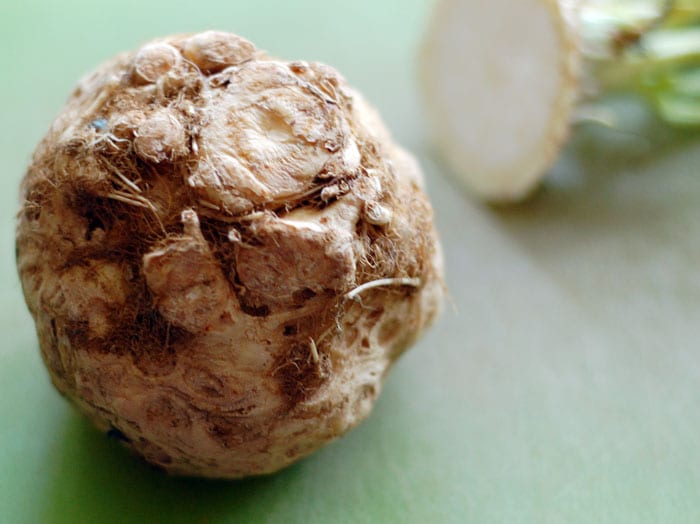 It’s sometimes called celery root, but it’s not the actual root of the plant we call celery. However, it does have a very mild flavor similar to celery and comes with the extra added bonus of being stringless.

It also makes a tasty substitute for mashed potatoes too if you want to give that a try.

If you just see it on your grocer’s shelf you might pass it by. It’s extremely weird-looking. Gnarled up, furry with course hair-like roots and so bumpy it can be hard to peel.

Don’t judge this veggie by looks alone – the flavor and texture are wonderful. 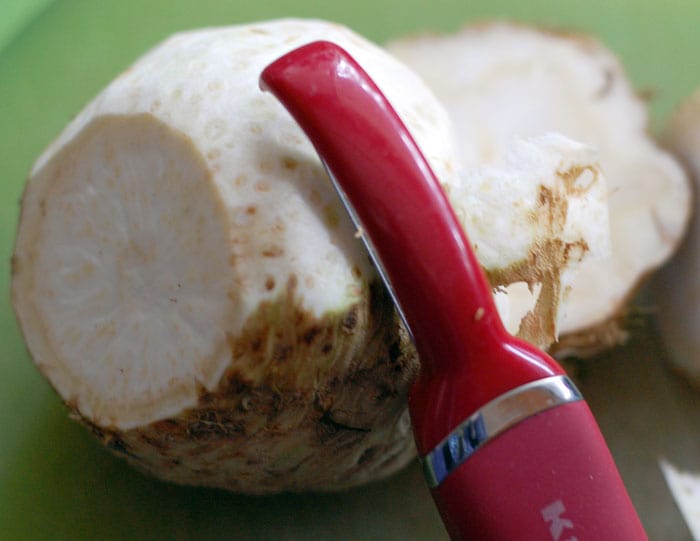 Is Celery Root Hard to Peel?

Believe it or not, the celery root pictured above is actually more uniform and easier to peel than most. I even got it at a chain grocery so it was pretty cheap too.

Make sure to weigh your root first if you are paying by the pound. I got an $8 one at Whole Foods before – ack! This one was about $3. 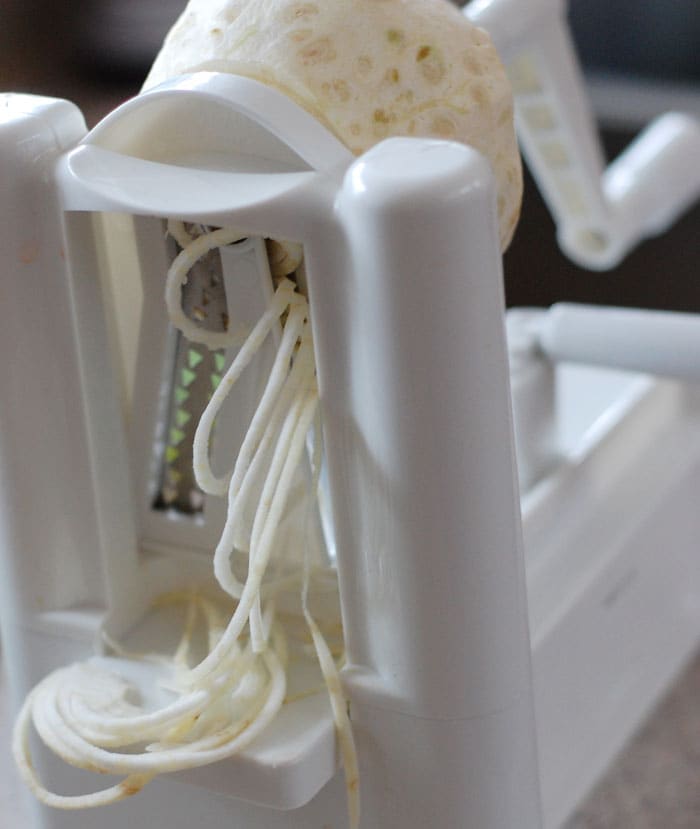 How Do You Spiralize Celery Root?

Once you’ve cut the end off the celeriac or carrots, peel, then create the noodle shapes with a spiralizer or julienne peeler.

I’ve linked to the Paderno spiralizer that I have pictured above. It gets the best reviews and I’ve been very happy with it so far.

I had to work much harder to get the celery root noodles, so make sure that you’re pushing in as you turn.

Close to the end, I had worn little grooves in the root on the side that was attached to the handle.

I took it off and turned it around so the spikes could get a grip again. This worked and I was able to make noodles out of almost the whole root. 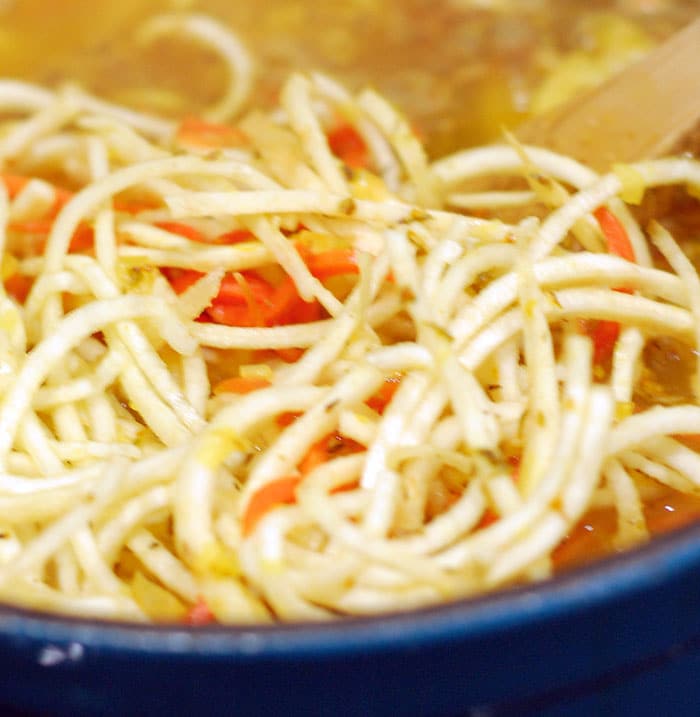 While the strands above are long – even though I broke them apart with a little stirring the soup broke them up into a more soup-sized noodle.

Even though that happened, the veggie itself does not get mushy.

I love the texture of this soup and ate 2 bowls of it for dinner. I didn’t let Cheryl take the leftovers to work either. They’re all mine! 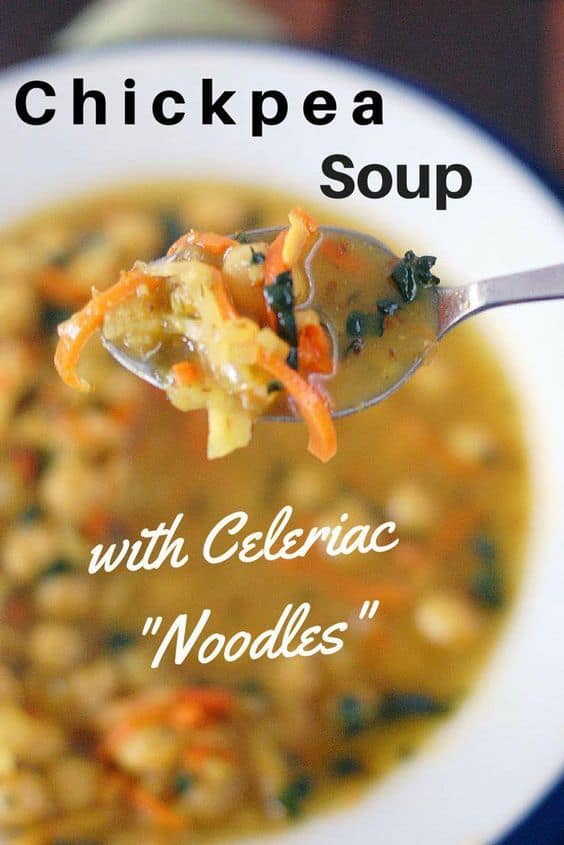