All it takes is a few ingredients swaps to make this vegan banana pudding. This southern dessert is still made the traditional way. It’s easy to make and I even have a shortcut you can use if you don’t have time to make your own homemade vegan vanilla pudding. This is one of my most requested vegan recipes.

My recipe is very similar to a traditional southern banana pudding recipe. There’s a thick vanilla custard base, layers of vanilla wafers, and of course, cut up ripe regular bananas.

After you assemble the layers it chills in the fridge for at least 1 hour. That turns the cookies into something that almost resembles a thin sponge cake once they have soaked up the moisture from the vegan pudding.

Be sure to scroll down to the bottom of this post for the full recipe card.

Table of Contents show
1 I don’t have time to make homemade pudding – do you have a shortcut?
2 Isn’t all cornstarch GMO?
3 What sugars are vegan?
4 Can I makes this refined sugar free?
5 What vegan milks can I make pudding with?
6 Vegan banana pudding recipe ingredients
7 How to make vegan banana pudding
8 How should I serve and garnish it?
9 How do I store southern banana pudding?
10 More dessert recipes to try
11 Vegan Banana Pudding with Homemade Vanilla Pudding
11.1 Ingredients
11.1.1 For the vegan vanilla pudding
11.1.2 To assemble the dish
11.2 Instructions
11.3 Notes
11.4 Recommended Products
11.4.1 Nutrition Information
11.5 Did you make this recipe?

I don’t have time to make homemade pudding – do you have a shortcut?

There is a little bit of planning involved if you make your vanilla pudding from scratch. You’ll need to cook your pudding and cool it before you assemble your dessert. However, there is another quicker alternative – just use vanilla vegan yogurt in place of homemade pudding.

The yogurt gives it a tangier flavor that’s not your typical banana pudding, but considering it takes zero work, it’s perfect for a last minute dessert. Make your own Instant Pot soy yogurt with this recipe.

Just make sure to let the completed dessert chill for at least an hour or two to overnight, so that all the layers meld and the cookies soften. That’s really the magic of this delicious dessert!

You can’t find organic cornstarch everywhere but you can always get it on Amazon or in your local Whole Foods store or coop. Part of being labeled organic means that it can’t be genetically modified.

What sugars are vegan?

Much white sugar is purified with bone char, making it not vegan. But you can find white sugar labeled vegan now that’s made with sugar cane and beets. Aldi’s even has a vegan sugar you can get now.

But if you live in an area where you can’t find any vegan white sugar you could make this with coconut sugar or brown sugar.

Can I makes this refined sugar free?

You could make this with maple syrup or agave nectar, but you might have to cook the pudding longer for it to thicken up if you swap a liquid sweetener for the cane sugar called for in the recipe.

What vegan milks can I make pudding with?

You can make this with any vegan nondairy milk because the corn starch is what thickens it into pudding. I love it with soy milk, but oat milk, almond milk, even coconut milk can be used.

I don’t know about you, but I grew up with instant pudding mixes bought at the store, which. made me think that making pudding was hard. But it’s not!

If you are making this in the summer I would recommend making the pudding in the evening or early morning when it’s cooler.

3 tablespoon of organic corn starch mixed with 1/2 cup non-dairy milk – you can use different milks like oat, soy, almond, or even homemade cashew milk

In addition to the vanilla pudding ingredients, you’ll need these to assemble your completed creamy banana pudding:

How to make vegan banana pudding

Gather your basic ingredients before you begin. Then make your vegan vanilla pudding by whisking cornstarch into your vegan milk and then adding vanilla, more milk, and the sweetener. It’s amazing that such simple ingredients can make such a wonderful dessert.

Whisk the cornstarch into a measuring cup with ½ cup nondairy milk until smooth.

Add the mixture to a medium saucepan and heat over medium heat. Add the 2½ cups nondairy milk, sugar and vanilla. Whisk frequently (every 3 to 5 minutes).

Once the mixture almost comes to a boil (about 10 minutes), lower the heat to medium low and cook until thick – whisking every few minutes so the mixture does not separate.

You will know the mixture is thick enough when it sticks to a wooden spoon instead of running right off. At this point it will not be as thick as pudding, but more of a thick vanilla sauce. It will thicken more as it cools.

Once thick, set the pan aside to let the mixture cool, if it’s very hot you can do this in the fridge. While the pudding cools, gather what you need to assemble your banana pudding.

Get out a dish and layer the bottom and sides with vegan vanilla wafers.

Spread a layer of pudding base and top with fresh ripe banana slices and repeat until all the pudding is used.

You can save any broken wafers to crumble on the very top or you can use the whole ones if you have enough.

Cover and chill in the fridge for at least 1 hour and as long as 12 hours. You can serve topped with vegan whipped cream or enjoy it as is.

How should I serve and garnish it?

You can make this extra fancy by building your dessert in a glass trifle dish, but a traditional banana pudding is usually served in a simple baking dish, and you can even just use a large bowl. in a pinch I like to make mine in individual servings. That way

Whipped coconut cream makes this an extra special treat, though you can top it with a simple sprinkle of cinnamon. You can also use a vegan version of Cool Whip, like So Delicious CocoWhip or TruWhip. The Cool Whip you grew up with has dairy in it, so it’s not an option for vegans.

How do I store southern banana pudding?

Keep it in the fridge for up to 5 days and make sure that you store covered with plastic wrap or the lid for your dish(es).

For the vegan vanilla pudding

To assemble the dish

If you want, you can enjoy the vanilla pudding by itself. In fact, you can vary the extract to make all kinds of flavors like rose water, almond, orange, and many more.

As an Amazon Associate and member of other affiliate programs, I earn from qualifying purchases.

Nutrition information is provided from nutritionix.com as a close estimate. If you have specific health issues please put the recipe information, including the exact ingredients you use, into the nutritional calculator your Dr. recommends. 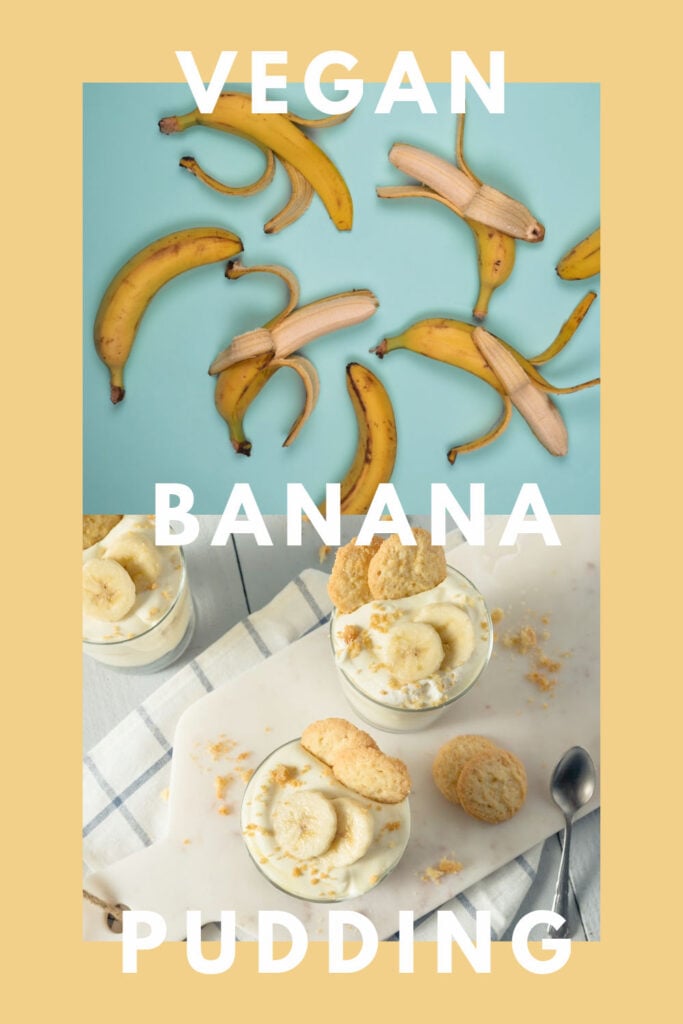