Jump to Recipe
Table of Contents show
1 What inspired this spiralized cucumber recipe?
2 Can I use a different sauce on my cucumber pasta?
3 How do I make cucumber noodles or cucumber spaghetti?
4 What if I don’t have a spiralizer?
5 Ingredients for Sesame Cucumber Noodles
6 How to make Sesame Cucumber Noodles
7 What do English cucumbers taste like?
8 Can you substitute soy sauce for tamari?
9 Which is better: sesame oil or toasted sesame oil?
10 More recipes to try
11 Super Easy Sesame Cucumber Noodles – PF Chang’s Copycat
11.1 Ingredients 1x2x3x
11.2 Instructions
11.3 Nutrition
Share on PinterestShare on FacebookShare on TwitterShare on RedditShare on EmailShare on WhatsAppShare on LinkedIn

These Sesame Cucumber Noodles are part yummy Asian sauce and part spiralizer love. That adds up to the easiest lunch you can pull out of the fridge!

Cucumber spaghetti is easy to make and you can spiralize them the night before.

What inspired this spiralized cucumber recipe?

To me, that makes it seem more like a real meal and more filling.

Of course, they discontinued the dish, but I still make this to satisfy my cravings.

This recipe is so easy, I can hardly call it a recipe. With that said, I’ve been eating it every day for lunch the past 2 weeks just because of its ease.

Can I use a different sauce on my cucumber pasta?

Yes, you can. I love a spicy peanut sauce on these, and a red curry coconut sauce would taste great too.

You could also switch the cucumber noodles up with zoodles if that’s what you have an abundance of.

How do I make cucumber noodles or cucumber spaghetti?

The easiest and quickest way is to use a spiralizer. It turns zucchini, yellow squash, butternut squash, and more into veggie “pasta.”

There are several types: the changeable blade model that has suction cups to hold it steady on the counter while you use it, a hand-held model that’s a little cheaper, and a variation of the first that uses gravity to make it easier to use.

What if I don’t have a spiralizer?

You can use a peeler to cut long narrow strips from the cucumber. It won’t look like pasta, but it will still have a good mouthfeel.

Where can I buy an inexpensive spiralizer?

First, keep an eye out at the Amazon Warehouse for a return.

Those are usually dented boxes and the like, but you can often get cheap kitchen appliances that way.

I’d go ahead and bookmark that link!

My second place to recommend is thrift stores. I’ve gotten one for most of my friends and have even upgraded my own a few times with second-hand store finds.

I even got a couple that was new and never used!

Here’s a quick list of this yummy Asian dish:

How to make Sesame Cucumber Noodles

It’s easy! First, spiralize the cucumber and break the noodles into soba-sized lengths.

Mix the rest of the ingredients in a medium-sized mixing bowl.

Toss the noodles in and mix. Plate up and sprinkle with sesame seeds.

English cucumber tastes milder and less bitter than regular cucumbers and the middles are often firmer too.

While they’re often promoted as seedless, they do have seeds, only smaller so they’re easier to eat, too.

They also do not need de-seeding, and even their skin is edible.

English cucumbers have unwaxed skin, so they’re typically sold with plastic wrapped around them. That means you can eat the peel if you’d like.

Can English cucumbers be frozen?

Many veggies retain their texture when blanched and then frozen, but not cucumber.

Cucumbers, when blanched and stored conventionally, do not freeze well.

Can you substitute soy sauce for tamari?

In many cases, yes. It’s highly likely that the tamari you’re seeing in some recipes is there because the recipe is gluten-free. (Most soy sauce varieties have gluten in them, that’s why).

So, you may sub the tamari in the recipe for soy sauce, and vice versa, using a 1:1 ratio—but not always. In some recipes, using too much soy sauce can be overpowering, as it tends to have more salt.

Tamari, on the other hand, has a richer and deeper soy flavor. But then again it can depend largely on what brand you’re using.

Tamari is 100% wheat-free, so it tastes like a mellow, less salty, and more nuanced soy sauce.

Traditional soy sauce contains wheat, which gives it a harsh, almost vinegar-like flavor that you don’t get from tamari.

Is white vinegar and rice vinegar the same?

Quick answer: no. White vinegar and rice vinegar may look similar, especially in their color, but they taste completely different.

Is rice vinegar the same as apple cider vinegar?

No, they come from two different sources—you might have noticed how their names give it away! 😉

Despite the difference, you may substitute one for the other in many recipes, such as sushi rice and marinades.

It’s just that apple cider vinegar is a little stronger and cloudier than rice vinegar. At least it’s still on the milder side.

Which is better: sesame oil or toasted sesame oil?

It would be more flavorful, but that makes it better for finishing than cooking.

You can use either in this recipe or leave it out entirely to make it oil-free.

There’s a lot more to do with cucumbers! You can have some quick pickle with cucumber and onions for nice side tofu dishes in the summer.

Also, when you’re in the mood for cocktails, mocktails, and other refreshments, you could add some kale cucumber cups from Vegan Finger Foods for your finger food party. 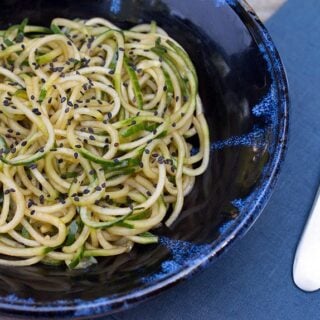 Kathy Hester
This is a great summer lunch or dinner. I’ve been eating it almost every day with some baked tofu straight from the fridge on the side. You can make this a day or two ahead of time to make the heat even a bit easier.
4.15 from 34 votes
Print Recipe Pin Recipe
Prep Time 10 mins
Cook Time 0 mins
Course Main Course
Cuisine asian
Servings 1 serving
Calories 152 kcal 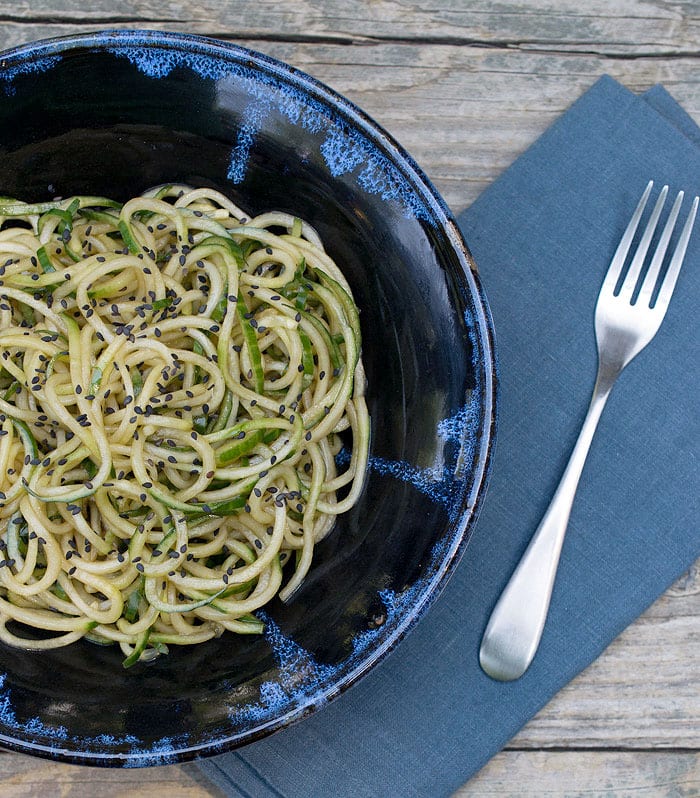