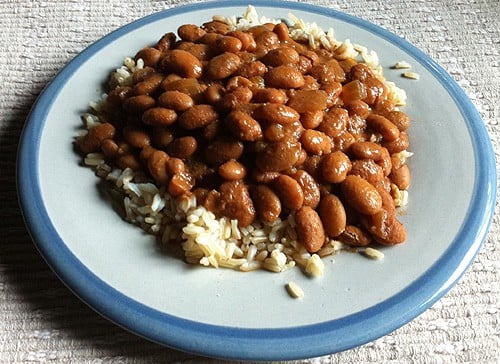 Thanks so much to Kathy for letting me share one of my new favorite recipes with you.

If you’ve been following my Cook for Good project, you’ve seen me use less and less dairy and eggs in 2011. In early December, I went full-fledged vegan. Was I reading The China Study again? Reading Eaarth? Weekly lunches with Kathy, queen of The Vegan Slow Cooker? Probably a combination of those forces.

I’d tried going vegan before, but gave up after three months. This time, it all seems so much easier. The vegan community is much larger, the resources are better, and I’ve already got a wealth of my own vegan recipes to draw on. Here’s one of my favorites: Slow-Cooker Speedy Beans.

Most recipes for baked beans use pork for flavor and long slow cooking to thicken the sauce. After talking about the physics of baking with my Taster, who is an engineer as well as a patient man, I tried to capture the creamy richness of baked beans faster and with less work.

The quick and easy recipe below makes beans every bit as tasty as the ones I grew up with, using equal parts peanut butter and tahini instead of pork and a slow cooker instead of an oven.

Bean Physics. Water boils when it reaches 212° F and doesn’t get any hotter except under special conditions, such as in a pressure cooker. So my original thought of baking beans and bread at the same time was a bust: a big pot of beans will drag down the oven temperature.

The acidity of the tomatoes and molasses makes a slow situation slower even slower by toughening the beans.

Speedy Beans. Beans can’t tell much difference between bubbling along in a slow cooker or an oven, but beans in the slow cooker cook faster.

Instead of cooking the beans uncovered in the oven to boil away some of the water, I just added less water in the first place. Don’t let tomatoes and molasses put the brakes on the cooking time either; add them when the beans are already tender, then let the flavors blend overnight. 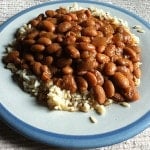 Try these mild beans for breakfast, especially if you can't enjoy a hot lunch. I first enjoyed beans for breakfast, along with pan-fried tomato slices, in many English B&Bs.
If you like this recipe and would like to get a delectable and affordable vegan recipe every week, sign up for the free Cook for Good newsletter.
And please check out my book, Wildly Affordable Organic: Eat Fabulous Food, Get Healthy, and Save the Planet--All on $5 a Day or Less. It's all vegetarian with a lot of vegan recipes, including an index to vegan recipes in the back. The front half of the book will help you make the best use of your time and money through the whole food-preparation cycle, from planning and shopping to cooking, cleaning, and storing.