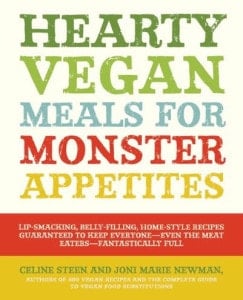 Last week I promised you book reviews and here they are this week. Better late than never right? I’m not sure why, but my to-do list is growing quicker than I can do anything!

Today I want to share one of Joni Newman’s and Celine Steen’s books, The Hearty Vegan. I was fortunate to meet Joni at Vida Vegan this year. She is sweet and good-natured, and she cooks up some mad comfort food. I’ve gotten to know Celine better the past few weeks and she’s awesome too.

I just wish I lived closer to these awesome cooks so I could “happen by” around dinner time. They are both so inventive and make recipes that you can feed your whole family. Even Grandpa couldn’t turn down their Beefy-Cheesy Mac.

I can testify that my picky eater,Cheryl, would jump at the chance to eat Joni and Celine’s food on a daily basis. At least, until they started making her eat more veggies just like I do!

caPhoto by Joni NewmanSo back to that Beefy-Cheesy Mac, I think it’s the most indulgent meal we’ve had in months.

On first glance, I had my doubts about the seasonings called for in the recipe. But I didn’t meddle at all and it came out perfect. It really was a bowl full of nostalgia and cheesy goodness!

Cheryl had a hard day at work and was super-excited to come home to vegan helper. I also had some guests who all thought it tasted great too!

Granted, it’s not going to be a beauty queen, but neither are a lot of the recipes that come from the slow cooker.

Joni and Celine are on our slow cooker wave too. Hearty Vegan Meals includes Slow Cooker Corn Chowder, Slow Cooker Russian Chick’n, and Slow Cooker Cocktail Weenies. Also many of the recipes can be slow-cookerized if you want to experiment with them.

The other recipe I made out of this was the homemade vegan Polish Sausage. You’d think since I make my own seitan I wouldn’t blink an eye at the mixing, rolling, and steaming involved. But until this recipe, I’ve actually avoided link making.

Joni and Celine held my hand through their detailed recipe. So, if you’re a novice, your first batch is bound to come out great. Cheryl is Polish and loved the sausage. I have the extras in my freezer waiting to go in my pierogi experiment at some future date.

To enter the giveaway do one or more of the following. You must leave a separate comment for each one you do to get the extra entry! The winner will be announced January 1.

More mouth watering pictures from Hearty Vegan. These were taken by Celine Steen.