I met Jill Nussinow this year when I was working on my second book, The Great Vegan Bean Book. I was working on instructions on various ways to cook dry beans. I had methods for the slow cooker, stove top, and even in the oven, but something was still lacking – pressure cooking.

I emailed Jill and she was kind enough to help me out and wrote a “how to” on pressure cooking beans. Since she did such an amazing job, I asked her if she would share some of her pressure cooking information and gear it towards you.

The Vegan Pressure Cooker for Slow Cooker Users – Is it Time to Get PC?

How the Pressure Cooker Works
The pressure cooker is a regular pot with a special lid with a pressure valve (or in the older models it’s a jiggler) that holds in the pressure (up to 15 pounds per square inch [PSI]) which allows you to cook more quickly because you are cooking at a higher temperature (about 250 at that 15 PSI). You are also cooking without air.

The result is, food cooks more quickly – generally in 50 to 70 percent less time than traditional stove top cooking. Additionally, the fast cooking time and lack of air tends to preserve nutrients, which results in effects such as brightly colored and firm textured vegetables. You also save energy in the cooking process which helps our environment.

How it Differs from the Slow Cooker
There are both stove top (my preference) and electric models of pressure cookers. The lid on the electric pressure cooker must be carefully sealed. This type of cooker more closely resembles your slow cooker in that you plug it in.

In either case, the pressure cooker’s high heat is likely the biggest difference between these 2 types of cooking. Additionally, with the stove top cooker, and some models of the electric PC, you can sauté or brown the initial ingredients (such as onions, garlic, spices) before adding the rest of the ingredients and liquid. There is no need for two different pieces of cooking equipment. I teach a lot of no –fat added recipes that work for programs such as Drs. McDougall, Fuhrman, Esselstyn, Ornish and Engine 2, Forks over Knives and the like, and browning those beginning ingredients without oil in the pressure cooker makes a huge difference in flavor in the end product.

The mechanics of the pressure cooker – temperature, lack of air and liquid (which is required for all cooking), helps infuse flavors into food, making them more flavorful. With foods such as tofu, tempeh and mushrooms the texture becomes firmer.

Adapting Slow Cooker Recipes
I am not sure of the exact timing for converting slow cooker recipes to the pressure cooker except that I am sure that you will need less liquid.

For instance in this recipe for Slow Cooker Mexican Quinoa with Beans, instead of using 3 cups of water, I would add just 1 cup of water and cook the quinoa from the start with the bell pepper (only red for me, though), garlic, chili powder and cumin for just 5 minutes at pressure. I would then stir in the tomatoes and cooked (just 4 to 6 minutes at pressure in the cooker) or canned black beans.  Alternatively, I could cook soaked black beans with the quinoa, using 1 ½ cups liquid for 6 minutes at pressure and let the pressure come down naturally (which it does in either case). Tomatoes often make beans tough, so I would add the tomatoes at the end with salt and pepper. Here are the results with beans and quinoa cooked together. 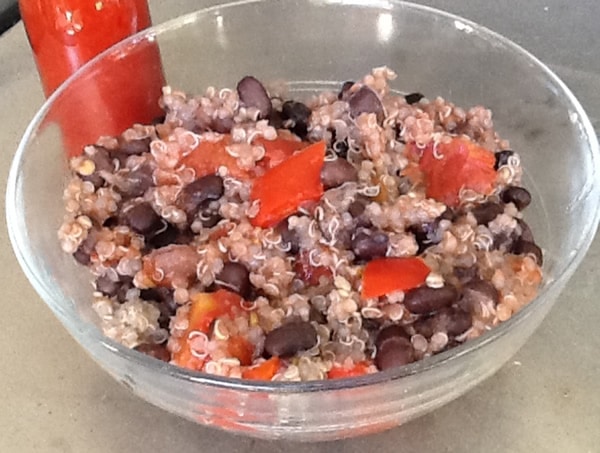 Just about every slow cooker recipe can be adapted for the pressure cooker but liquid added and cooking times will have to be adjusted substantially.  The cooking time and liquid issues could be easily determined once you looked at pressure cooking charts, like the ones in my book, The New Fast Food: The Veggie Queen Pressure Cooks Whole Food Meals in Less than 30 Minutes.

Vegetables take just one to three minutes at pressure. The longest cooking vegetables such as potatoes, winter squash, parsnips, and other hard vegetables take just 3 minutes at pressure. Making mixed dishes requires releasing the pressure a time or two but it’s worth the effort to have great tasting food in less than 10 minutes. All the vegetables turn out perfectly cooked when you use this method. You can, of course, choose to put them in all at once if you prefer. The time savings is huge.

One of my favorite things to cook in the pressure cooker is broth or stock which cooks for only 5 minutes at pressure, with a long natural pressure release. I cook this weekly to use in my mixed vegetable (and tofu or tempeh) dishes and, of course, for making soups.

Energy Savings
The pressure cooker and slow cooker save energy versus other cooking methods.

I would like everyone to give pressure cooking a try because of the great tasting food resulting from the process. Now you know that if you have a pressure cooker, you can use your slow cooker recipes and adapt them fairly easily.

You can see more of what Jill does at The Veggie Queen website and her Pressure Cooking website.